Look at the dates on these tweets.

@JimCameron I would give anything to be able to write/direct/storyboard Terminator for you in 2020 while you have your fun in Pandora. XD

@JimCameron The events of T2 stopped judgment day, but machines exist behind the scenes and eventually kill John Connor in this new timeline

@JimCameron Keep it simple. Just Arnold, Linda, and new lead actress. Love interest can be introduced in sequels. Or brief cameo in this one

@JimCameron Also don't humanize Skynet at all like in those failure films. Skynet works as a faceless ominous entity looming in our paranoia

@JimCameron PS stay away from things that failed in the other films. Stay away from scifi tangents, time travel, keep it grounded in realism

@JimCameron I read you were​ looking for sci-fi authors but this film needs a hard dose of reality if you ask me. Go watch Logan now and see

@JimCameron There shouldn't be anything confusing that will muddle the narrative. Time travel began this story but shouldnt stay prevalent

@JimCameron There you go, problem solved, everything you wanted is in this "script". You're welcome!! I really hope you steal my ideas lol 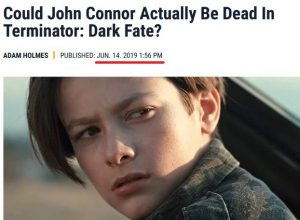 It was secretly me.

I basically wrote out all of the terrible films. They are all terminated. You just watch just Terminator 1, then Terminator 2… And then this one, the *real* Terminator 3.

None of the others exist anymore. Those were all a bad dream. Pretty cool, right?